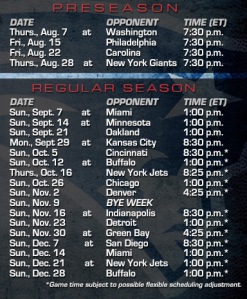 The New England Patriot’s 2014 schedule has been released. The Patriots have some tough opponents this year. Some of the games that Patriots fans should be looking forward to are when they play the Denver Broncos, Green Bay Packers, Indianapolis Colts, Cincinnati Bengals, Detroit Lions, Chicago Bears, Kansas City Chiefs, and San Diego Chargers. New England has a Bye Week in week 10 of the NFL season this year. Hopefully the Patriots will have another great season.

The 2015 Super Bowl will be held in Glendale, Arizona on February 1st in 2015. The game will be played in the University of Phoenix Stadium, home of the Arizona Cardinals.

Image from the Media Library.

Here is a sneak peak of the Super Bowl 49 trophy.

Tell me what you think! Cancel reply